In 1970, Simon Heaps of the YMCA Club in Reading, won the European Cadet (Under 14) title for England.

Simon’s success inspired Peter Charters and Reg Hart to convert a war time pre-fab building in Green Road, Reading, to create the Omega Club. Between Reg, an engineer and Tony Reeves, a surveyor and parent of David, the bungalow was gutted of walls and a pitched roof erected to form a one table venue. Despite this restriction, Omega became a table tennis excellence centre for a small number of young and aspiring players.  Throughout the 1970s, Omega Club helped players to national titles and even junior international titles with many more going on to achieve major international success over the next twelve years.  The first of these came when three of the four young girls who had been part of Omega from the start made up the entire England Junior Girls team at the European Youth Championships in Barcelona in 1978. Karen Witt, Alison Gordon and Many Smith were the top three girls in England.

The encouragement gained from this droveOmega players on to more successes. Matthew Syed was the stand out example of this.With Karen Witt he shared the honour of being a Commonwealth Individual Champion,and with Alison Gordon (Broe) his Olympian status. All three were NationalSenior Champions, with many others becoming Junior and Cadet English Champions and internationals.

After twelve years, Omega’s lease was terminated due to a proposed building project. The club’s successes warranted the then Berkshire County Council offering a new 20 year lease to a piece of ground on the site of Bulmershe School. Omega had already purchased a pre-war, wooden school building which was being demolished in Sonning Common close to the home of Brian Halliday, a member of the Omega committee. Piece by piece this building was transported first to Green Road and then to Bulmershe School.

Omega’s problems started when it was realised that with only fifteen members, all juniors, the club lacked the man power to finish the construction. The Omega parents had laid the foundations and some of the flooring but it became clear that more help was needed. The local Woodley TT Club had been searching for premises. It had met in the main hall at Rivermead School in Woodley. At a meeting held between the two club Chairmen, MikeBullock for Woodley and Peter Charters for Omega, it was agreed to join forces to create a new club which would embrace the two table tennis philosophies - Omega’s concentration on youth development and Woodley’s table tennis for all.

As a result, a group of volunteers built a fantastic four-table, dedicated venue to be known as the KingfisherTTC. The new clubhouse was opposite Kingfisher Drive where Big Jim Stokes lived. Jim went on to be an important part of the Kingfisher history as a coach. The choice of name was also influenced by the fact that from a promotional aspect, it is a colourful bird with only one nasty habit. A huge amount of voluntary work followed under the direction of builder Jim Hodder who was a member of both Omega and Woodley clubs.

Opened by former World Table TennisChampion Johnny Leach in January 1988, the ceremony was attended by the newly elected MP for Wokingham, John Redwood.

Omega’s principle that all players should have their own key to the club, was continued by Kingfisher.

Peter Charters was the new club’s first Chairman, to be succeeded for the next 21 years by Brian Halliday. John Fenton was Kingfishers’ first President succeeded by Peter Charters and John Witt its first treasurer.  In 2009, Colin Dyke took over as Chairman and Treasurer, having been Secretary since the formation of Kingfisher.

In 2013, the club was informed that our building would have to be demolished to make way for a new school block.Wokingham Council  generously agreed that they would provide a new, purpose-built venue elsewhere on the school campus.The new building would be the same size and configuration as the old clubhouse that had been physically built by the members all those years before.

In May 2014, the old Kingfisher Club was demolished, the new clubhouse built and in June 2014 a grand opening ceremony was held. At this, Matthew  Syed, now a successful author, journalist and  broadcaster,along with Councillor UllaKarin Clark, the Mayor of Wokingham, formally opened the new Kingfisher and signalled the next chapter in local table tennis history.

Pictures of the new club under construction. Picture of Paul and Joanna Drinkhall, both national champions at the time, visiting the club during its building. (Bottom right) Left to right:- Mandy Sainsbury, Mayor of Wokingham, Matthew Syed, Alison Broe

This club is a rarity in table tennis. A purpose built, seven day a week dedicated table tennis facility with members holding a key. It provides members with a training, practice and competition venue.

Since the opening, the club continues to blossom. New volunteers have taken over the reins. Mick Mitcham (Chairman and table bookings officer), Puja Chopra (Treasurer), Raj Patel (membership secretary and junior coaching officer) has brought technological innovation to the role of coaching administration, resulting in more young people playing table tennis than ever before during the history of either Omega or Kingfisher. Roger Pritchard (Club Secretary and morning clubs co-ordinator),  Andy Yon looking after our precious building and Peter Charters remains as President. Ajay Naik Head Coach and Ajai Kammath is IT officer and web master.

Since those early days, a number of those mentioned, who made a massive contribution to this club’s history, have passed away.         We will always be grateful to them. 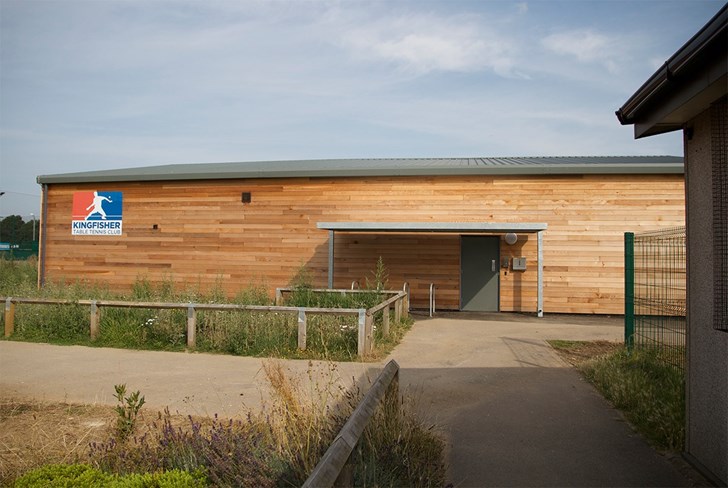 Picture of the Club as it is today